Despite the cold & windy start to the day 43 of you set out this morning, only for 9-players to call it a day when the rain set in – do we blame them, ugh, NO!!

A short & sweet report this week as with the Quiz Night a sell-out; the Pedley very well supported; as we are also about to close the book on proposals for the AGM, we have just about run out of appeals.

Instead a quick cartoon to brighten the page, and then it’s on to the results. 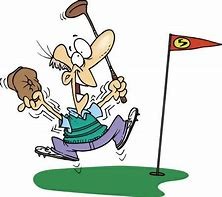 Jerry when he thought he had the Bob

It has finally happened, we have a BoB winner – congratulations go to Nick Tomaszewski, but commiserations to Jerry Senior who barely missed an 8-footer.   Just so that you don’t geting too complacent, next week we progress to the 17th.

As for the roll-up, a high scoring game in both divisions despite the conditions, the results being:

Congratulations to Nick again, and to all our roll-up winners.

Next week we return to our bi-weekly team game that is becoming the norm for the winter months, this time it’s Yellow Ball.   As for the weather, a little warmer and breezy than this week, but with the possibility of a light [that’s what it says] shower – well come on, it will be December!!!!!

I look forward to seeing many of you on Friday at the Quiz-Night!!!!