It looks as if we have seen the last of the fine weather, and with the clocks having changed winter will soon be upon us!   Consequently this newsletter will be reprising our most recent event while providing a ‘heads-up’ on what is to come to brighten the impending gloom. 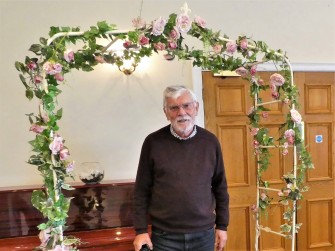 I am reliably informed that the Awayday at Wrag Barn was a great success, providing a fitting ‘swan-song’ for Laurence Waters who is stepping down as Awayday Secretary.   Very many thanks for a job well done Laurence, and I’m sure that your fellow members will be queuing-up to treat you to the odd glass or two at the clubhouse bar in the weeks to come.

As for the days facts & figures, as well as the much-coveted Jock Strap Trophy there were the usual sweep-prizes to be won with the principal results being:

A full list of all the prize-winners can be found as ever on the Seniors’ website: https://carswellseniors.com   And for the benefit of those that are not familiar with the valuable trophy named after & modelled on that much lauded Carswell member, Jock McStrap – see image below:

Tony Scrivens, being taken ‘in hand’ for winning yet another trophy!!!

Laurence’s departure serves as a reminder that as we approach the end of the year, it will soon be time to elect the committee members that will take office in 2019, which leads nicely onto:

Captain v Vice-Captain:       This annual match arranged as a thank-you to those that have participated in ‘inter-club’ matches during the year will take place on 1st November.   Those participating will already have been notified of the draw.

Quiz Night:                            An opportunity for a pre-Christmas social get-together on 30th November at the clubhouse.   Doors open at 7:00pm and the entertainment will include the Quiz [hence the name], a 2-course festive buffet, and not forgetting the Christmas Jumper Competition.   All Carswell members and their spouses/partners are welcome, and tickets at just £11.00 per person are now available from the clubhouse & pro-shop office.

Colin Pedley Trophy:           This is the competition that closes the seniors’ golfing year which this year falls on 18th December, the format being an individual stableford played off the white tees and scored using the average of club & seniors handicaps.

The competition will be followed by a roast lunch and the presentation of the trophies & awards won throughout the season.   Cost of entry will be £10.00, payable in advance, to include the entry [£2.00] into the sweep.

Seniors AGM:                       This is being held on 8th January following the first roll-up of the New Year.   The reason for the switch from the previous December date is that an AGM should always be held after the close of the financial year, and ours runs from 1st January to 31st December.

The AGM will include the election of the Seniors’ committee and will also provide an opportunity for members to make proposals for changes and/or improvements in the way we operate.   Notices calling for nominations and/or proposals for discussion have now been posted on the notice board – but please note, you will need to submit your proposals on/before 30th November, and nominations by 18th December.   The AGM agenda including a list of proposals will in turn be posted by 14th December.

An optional buffet lunch will also be available at a cost of £8.00

Heard on the Course