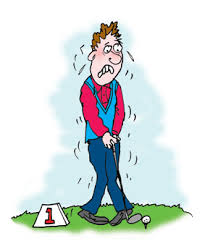 A competitor, unable to find his ball after a shot of approximately 150 yards (300 yards in the case of Brian Reid) from the tee, drops another ball in the area where his original ball was lost and plays that ball. What is the ruling?

A- The player incurs a penalty of one stroke.

B – The player loses the hole.

C – The player incurs a stroke-and-distance penalty and an additional penalty of two strokes for a breach of Rule 27-1. He must rectify the error; otherwise, he is disqualified.

Explanation: It is not permissible to drop another ball where you think your

original may be lost, you must proceed under stroke and distance, i.e. play a ball

as nearly as possible at the spot where the original ball was last played, under

penalty of one stroke. As the player has dropped a ball and played from a point

done so, he has played from a wrong place. As his actions constitute a serious

breach of playing from the wrong place, he must rectify that error. See also